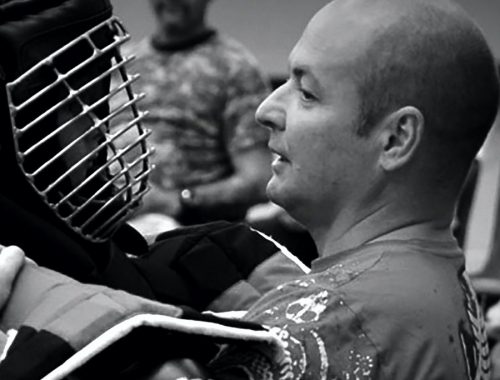 Dean first started his training in the 1980s participating in Karate and Judo classes during high school at the local YMCA. Later he trained in a Kempo Kung-Fu style under Grand Master O. E. Simon in North Vancouver Canada. The art was a synthesis of both the hard and soft aspects of Kung-Fu. Returning to training half a decade later and joining Cyclone Fighting Arts he studied under the tutelage of Mr Fred Shadian. The material in the school that most greatly interested Dean was Bobby Taboada’s (Balintawak Arnis Escrima) and Remy Amador Presas’s (December 19, 1936 – August 28, 2001) system of Modern Arnis. While studying at RMIT University in Melbourne 2000 he met Mr. Rod Harris a consummate practitioner of Praying Mantis Kung Fu and MMA fighter that shared techniques and attributes to better his skill set. After graduation and moving to Bunbury Western Australia in 2008 he flew to the Philippines to directly train with Filipino Masters of the Doce Pares Multi Style System. He studied under Grandmaster Dionesio A. Canete and Master Gerald Canete among many other talented Masters. He earned a third-degree black belt…. END_OF_DOCUMENT_TOKEN_TO_BE_REPLACED